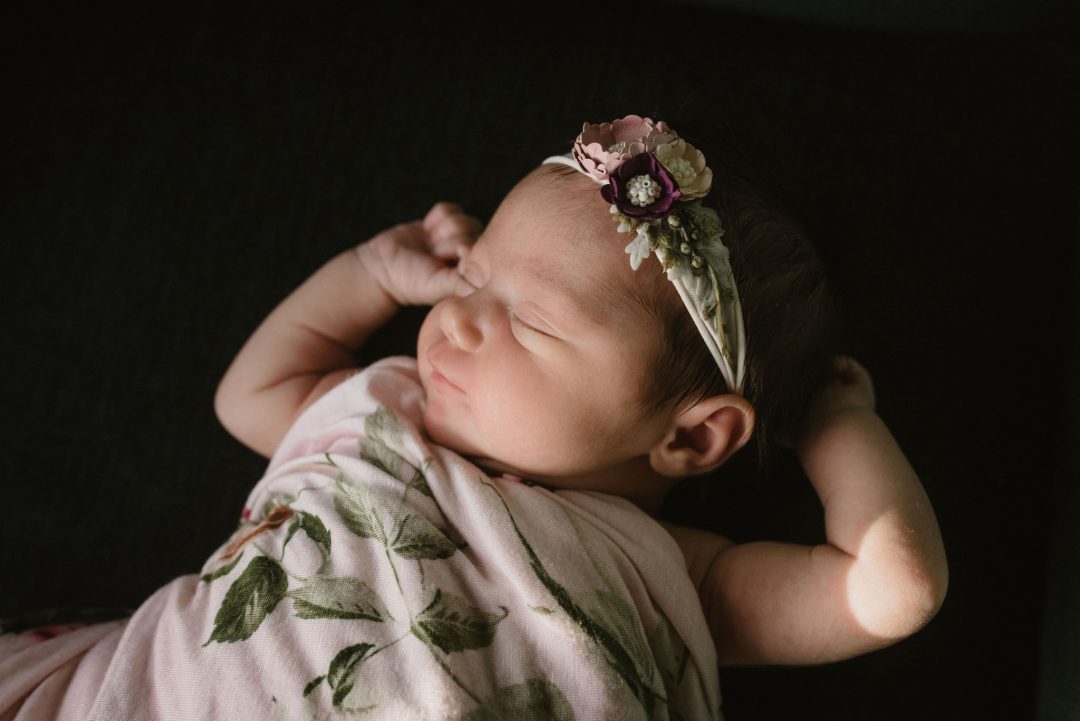 I had been dreaming about a VBAC for my second baby since Henry was born – literally Googled them incessantly while sitting on the couch with him as a fresh week old newborn. I felt so “robbed” of my dream birth experience with him that I was determined to “make up for it” the next time around (that feels so silly now!). I even switched OBs to a VBAC-friendly practice but when I asked him about my chances of a future VBAC, his response was, “your stars would really need to align.” When I got pregnant with Evan, I suddenly didn’t care how it went down and scheduled a c-section for December 20th (my due date was December 23rd) but kept the VBAC option open in my mind just in case. I liked that the c-section was planned and that I could arrange for Henry to be with my in-laws and do it around my husband’s patient load/the holidays (EYE ROLL). At the same time, I wanted to experience a more natural birth so I figured I’d let fate handle it & just leave my options open to whatever might come. 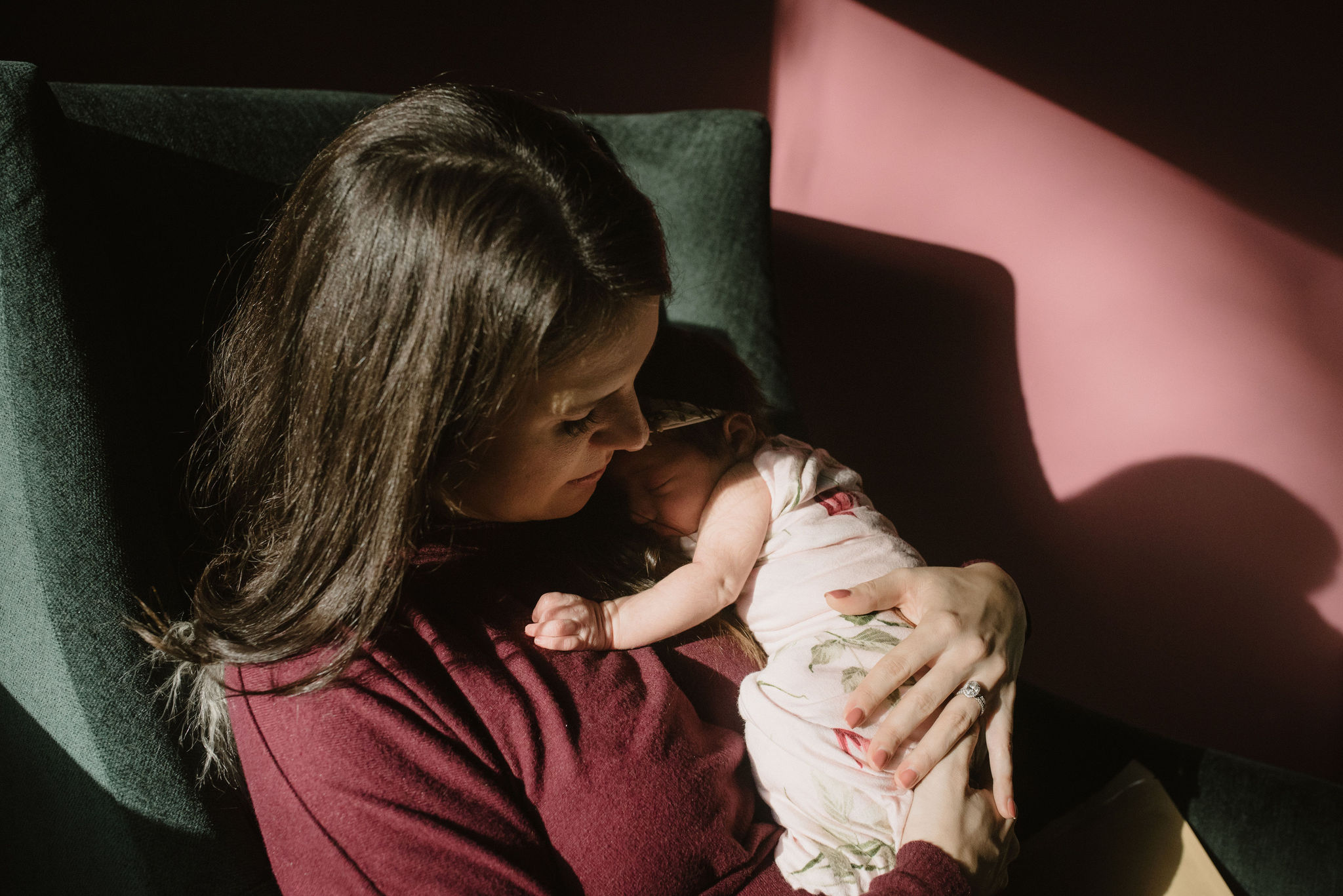 At my 34 week growth scan, Evan was measuring big – just like Henry did. She was on track to be his size at 40 weeks. If you don’t remember or are new here, you can read my birth story with Henry here. Needless to say, I kind of felt like my VBAC dreams were crushed & I switched gears to 100% planning on having my original c-section on my scheduled date. Now things get interesting!

At 37 weeks (a Monday) I went for my weekly check with my OB, and even though I was scheduled for a c-section, he checked to see if I was dilated at all. And.. a measly 1cm. Experience has taught me that 1cm – even 2cm – means nothing so I didn’t think much of it and went about my business (aka a haircut and a pedicure). On Wednesday, I woke up with some major stomach issues that lingered through the night and into the next morning. I knew from previous research that this could be a sign of impending labor as your body cleans itself out to make room for the baby to enter the world, but was also fearful of getting dehydrated (this happened a few times in my first pregnancy & landed me in the hospital for observation), so I called my doctor’s office just to mention it. They wanted to see me and check on the baby, so that afternoon I arrived for my appointment (Thursday).

My doctor wasn’t in the office that day, so my appointment was with the midwife. When she went to check how dilated I was, she looked at me and asked with a little bit of concern in her voice, “how dilated were you on Monday..?” I told her and she said, “well you’re 5cm now!” They quickly hooked me up to a contraction monitor to make sure baby was still doing okay because her heart rate was a little high. When all checked out okay, she said I could go home and wait for things to progress on their own & to call if and when they did because I was only having mild contractions. I still didn’t believe this could happen on its own, especially since I was still 2.5 weeks from my due date AND had to be induced with Henry. My doctor called me the next morning to check on me & he told me that it looked like my stars WERE aligning for a VBAC if I wanted to attempt – which I did! A few days came & went, my stomach was still iffy, but nothing else really happened. So, I spent the weekend taking Henry to soccer, bouncing on a yoga ball, & doing all my other regular weekend activities. Sunday afternoon, a friend & I got a reflexology foot massage. Sunday night, after dinner, I was sitting on the couch while the whole family was over for dinner and suddenly I heard a “pop!” and felt a gush. I ran to the bathroom and yelled that my water had just broken (holy moly!). The doctor’s office advised me to make it to the hospital as soon as I could since I was already 5cm when they last checked me. I kissed Henry goodbye and started to cry. I was excited & anxious, but also so sad to kiss my baby goodbye for the last time as an only child.

Once I was all checked in to the hospital, IV inserted, and hooked up to the monitors, the nurse wanted to see how dilated I was and while she reported that I had only progressed to 6cm, she also said she felt something “squishy” and she thought maybe the baby had turned breech. She ordered an ultrasound to check baby’s position and we sat and waited for them to come. And waited. And waited some more. An hour and a half+ passed, and that was also an hour and a half of med-free contractions so I was getting pretty antsy and uncomfortable. The ultrasound showed baby was still head down so..what gives? The doctor arrives at this point and goes to check and discovers Evan’s arm/hand is in front of her face (that’s the “squishy” thing) and orders my epidural so he can try to reposition her when I was more comfortable.

The anesthesiologist arrives and inserts the epidural catheter (it’s really not bad, I promise). We wait for it to set in so the doctor can get busy trying to reposition the baby’s arm. Well, Evan had other plans it seemed! When the doctor went to do his thing, he looked up and said, “well.. there’s another hand in here besides mine.” The epidural must’ve relaxed everything (+ I was 8cm) and her hand passed through first. So, no VBAC. It’s not safe to deliver a baby that way and off I went into the OR for my second c-section. After a whirlwind, Evan Rae was born at 1:17am! And honestly, this time I’m SO okay with having to have had a c-section. I tried to have a VBAC & gave it my best shot but it just wasn’t meant to be. 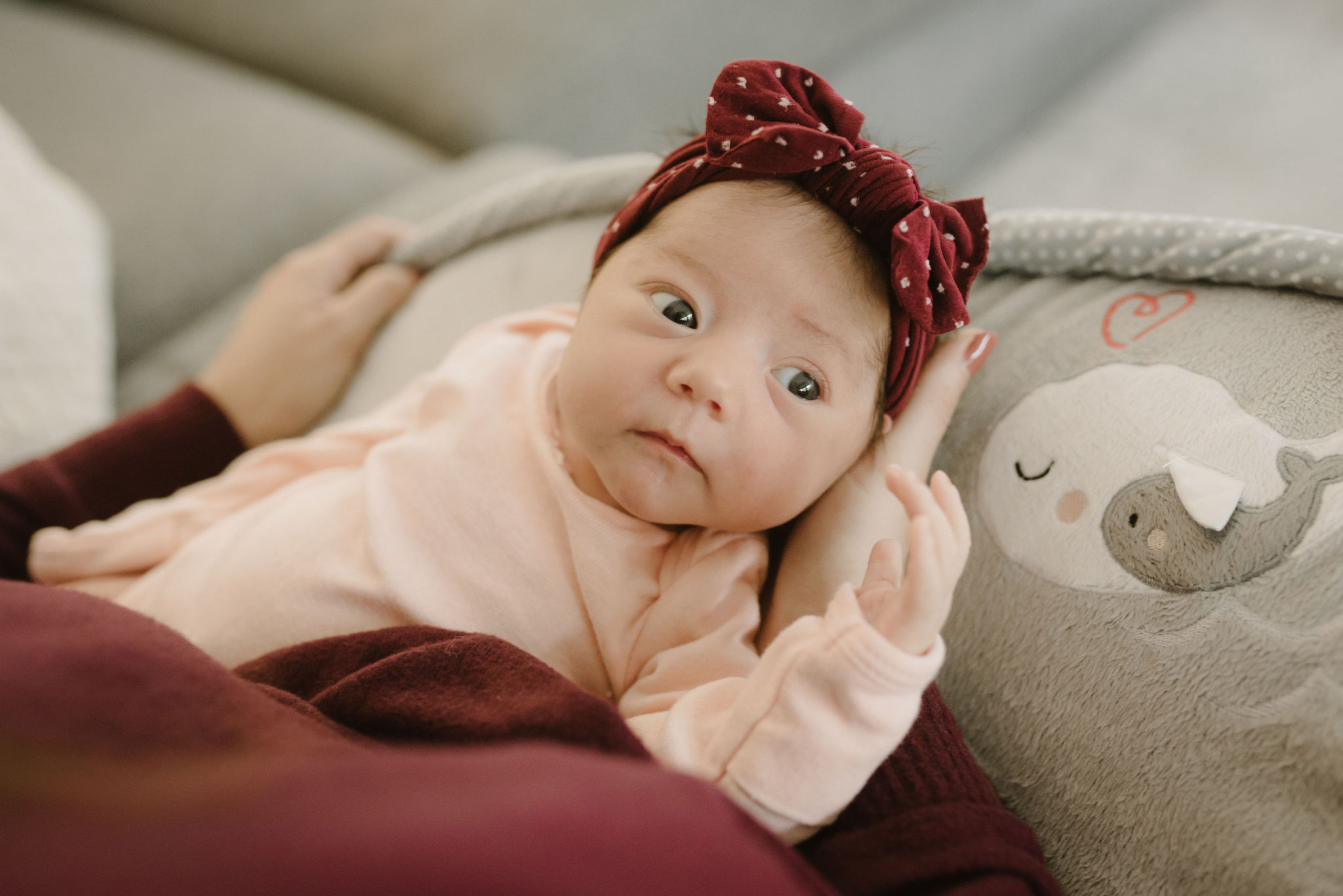 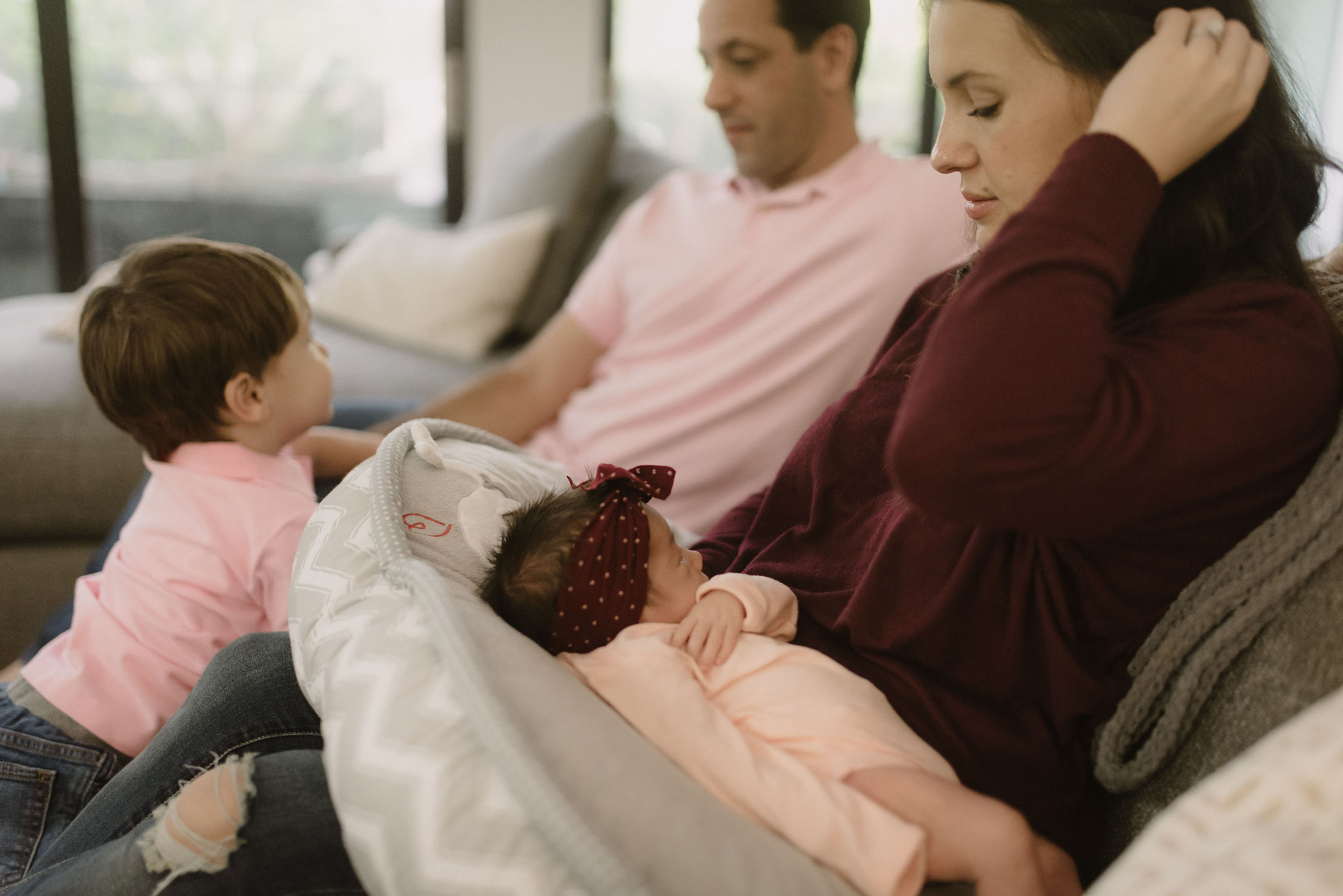 [All photos by Coviello Photo] 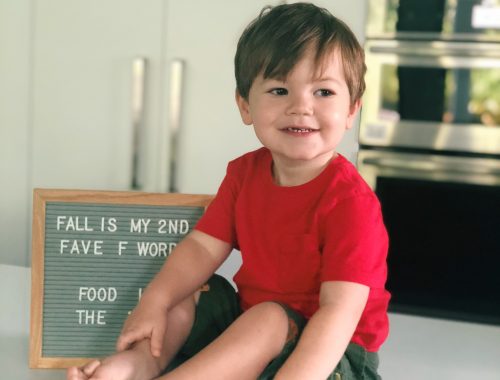 How I Find Time to Cook with a Toddler 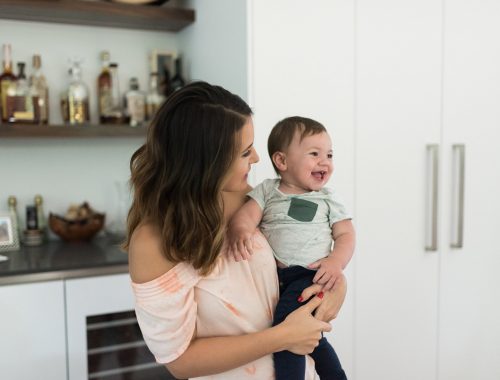 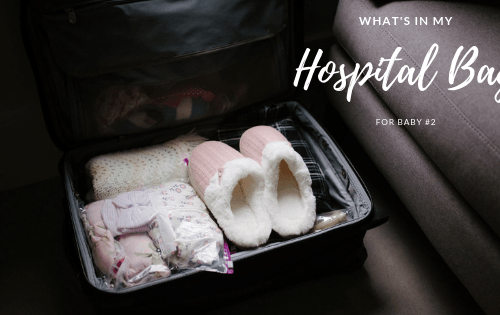 What’s In My Hospital Bag For Baby #2